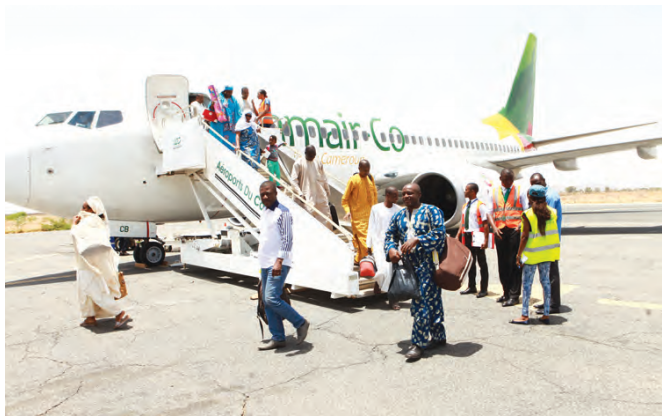 Par Roland MBONTEH
0 Comments
T he national air carrier,  Camair-Co, is pursuing  its strategic ambition  to conquer the African  regional market. After spreading  its tentacles to eight out of the  ten regions of the country, the  national airline company is now  targeting the regional market  with destinations such as Abidjan,  Dakar, Libreville, N’Djamena,  Cotonou and Bangui amongst  others. The extension of Camair-Co’s regional network is  intended to keep the company  afloat as was recommended by  the American Boeing, a consulting firm that carried out an  audit of the company. The air  company is now focusing on  intensifying its national and regional network as its present  situation renders it uncompetitive in the inter-continental  market. Reason why unprofitable  destinations such as Paris has  been momentarily suspended.  According to information on  the company’s website, flight  to Bangui in the Central African  Republic will be launched on  December 3, 2017. Meanwhile,  flights to other destinations in  the Central and West Africa will  be progressively launched from  December 15, 2017. Camair-Co  has programmed four flights per  week on Mondays, Wednesdays,  Fridays and Sundays. The company has also facilitated access  to flight tickets for clients as  they can buy via mobile money  and book flights online.  Camair-Co’s  intern...